To learn more about repellents, go to How to Use a Repellent (or Insecticide) for Insects, Mosquitoes and Ticks.

There are many mosquito repellent (insecticide) products. Here are a few:

1. DEET (N,N-Diethyl-3-methylbenzamide): the most common

DEET has been used in North America since the 1950s. DEET has an approval number from Health Canada meaning that it has been certified safe. If the concentration is between 5-30%, no more, Health Canada states that DEET is a good choice for the general population. Use should not be for prolonged periods.

Quebec adds clear directives about precautions that should be taken when using repellent products like DEET. 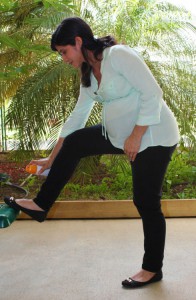 Some scientists have said that pregnant women should not use DEET, but after verifying this with pregnancy pharmacologist experts and the INSPQ, using a product with a maximum of 30% DEET is safe for pregnant women.

According to CHU Sainte-Justine’s guide to medications allowed during pregnancy and breastfeeding, a breastfeeding woman can protect herself with a mosquito repellent with a maximum DEET concentration of 30%, used on exposed skin only.

Using a Product with DEET

The recommended concentration depends on age:

Examples of DEET-based products on the market with concentrations between 10-30%:

Even if DEET is the most common, there is another chemical molecule that is just as effective as DEET which comes with fewer inconveniences. The Public Health Agency of Canada prefers the use of this molecule for children between 6-12 months, rather than DEET..

You should know that icaridin is also safe for pregnant and breastfeeding women if the concentration is below 20%. This applies to children between 6 months and adulthood.

Products that contain 10% icaridin will be effective for 3-5 hours. The 20% version will protect from 8-10 hours.

Should be avoided with children under two, pregnant and breastfeeding women.

Never use this product with pregnant women and babies under three years of age.

It is effective for about two hours. This product is recommended after DEET and icaridin.

It protects under five hours and should be applied twice a day maximum.

Never use on the skin, but can be sprayed on mosquito nets, camping equipment and clothing.

With a concentration of 2%, soybean oil can be applied to children older than two years, but not on pregnant women. It is effective for three hours.

There are organic and natural alternatives for mosquito repellents. The ingredients are often citronella, eucalyptus, soybean oil and lavender.

There are even fragrant bracelets that will repel insects.

All citronella, lavender and eucalyptus oil-based products, or those that smell like citronella, are not recommended by Health Canada for children under two years of age, as their effectiveness is too short (20-30 minutes), and there is little research about their effects after use. Many have noted skin reactions and severe irritation after application.