Yes or No? Is a Breech Birth Possible?

In this article, I want to share more information with you about breech positions and birth.

Throughout your pregnancy monitoring, your caregiver will make sure that you’re doing well and that your baby is growing based on expectations. You will have ultrasounds at different times for different reasons and will vary from woman to woman depending on your pregnancy. 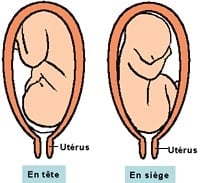 During follow-up visits, your caregiver might touch your abdomen, listen to the baby’s heart, and might think that your baby is buttocks first in your pelvis. However, they will wait until about 36 weeks of pregnancy before evaluating the situation. This is because the babies frequently change their position themselves.

Is it dangerous if they remain in a breech position? Not necessarily. The baby will be fine in that position, but a breech birth is more problematic given the larger diameter of the baby if their head exits last.

Around 4% of babies are breech, and if there are no observed contraindications, your caregiver might suggest a version between the 36th and 37th weeks of pregnancy. Parents always have the choice of trying a version. Your agreement is always voluntary.

What is a version?

A version is a procedure conducted on the outside the mother’s stomach to move the baby, turning it to the head-first position.

This procedure is performed by a medical specialist in the hospital after a control ultrasound checking the baby’s position, the amount of fluid and the location of the umbilical cord to guide their work.

The doctor will act prudently for this procedure, and if they suggest it, it means that there’s a good chance it will work. If it becomes more difficult than expected, they will stop the procedure and send you back to your doctor, who will determine the next steps.

Version success rates are often around 40% to 50%, but some statistics indicate up to 58%.

Thanks to www.pregnancyinfo.ca for the illustrations.

A version won’t be suggested if:

Often, when parents tell me that their baby was breech before the end of pregnancy, I suggest that they see an osteopath or acupuncturist specialising in obstetrics to help relax their structures. These caregivers can use specific procedures to work on the pelvis to provide the baby space to change position themselves. They will also suggest different positions to help extend the mother’s torso, stretch their upper body to increase the baby’s space and ease its mobility.

Anyways, it can’t hurt, and if the baby doesn’t change position, at 36 weeks version will still be a possibility.

To be able to give birth to a breech baby vaginally, you first have to evaluate each woman’s situation and to focus on the benefits for both the mother and baby. That said, you should understand that it’s difficult to compare yourself to another person, because you’re all different, as are each situation.

To ensure that the efforts aren’t in vain, the doctor will tell you why they will choose one alternative over another.

First, before they will tell you if they attempt a breech birth, they will examine:

Figure 3: Footling Breech (one of the feet pointing down)

Thanks to www.pregnancyinfo.ca for the illustrations.

Usually, they will wait for labour to start on its own, but sometimes they might carefully use oxytocin (a hormone that provokes contractions) to stimulate labour a bit if everything is going fine. The doctor will then examine the woman’s status, chances of success, possible complications, etc. So, if labour hasn’t started, preferably it won’t be induced.

It’s also true that, if the woman already has other risk factors during pregnancy, such as hypertension, pregnancy diabetes, or a chronic illness, caregivers will avoid multiplying risks for no good reason.

Caesarians due to breech will be likely in several situations, including:

A caesarian may also be performed at any time during an attempted breech birth if:

Even if the breech occurs very low in the mother’s pelvis, it’s always possible to conduct a caesarian if necessary.

So that sums up some of the main points about breech positions and birth. I hope this article can help you understand the situation and point you to different possible options for you and your doctor.

Please read these other related articles (in french):

Or watch these videos (in french):