To learn about diabetes characteristics, read Gestational or Pregnancy Diabetes. 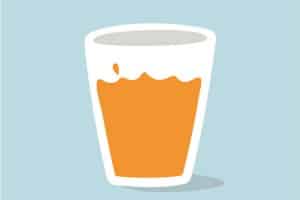 The screening test for gestational diabetes usually takes place between 24 and 28 weeks of pregnancy. Most women will take the 50 g test drinking a very sweet orange juice. The juice contains 50 g of glucose and rapidly increases the sugar level in the blood. One hour later, a blood test will be done to check how the pancreas reacts and increases insulin production due to the increased glucose.

The test doesn’t have to be done on an empty stomach.

Due to the drastic change in blood glucose, some women may feel unpleasant symptoms, such as nausea and sometimes vomiting, reflux, increase heartbeat and even feeling like they will pass out.

When the results are within normal values (between 7.8 and 10.2 mmol/l, which may vary depending on the medical team), the pregnant woman does not have gestational diabetes, and her pancreas is managing the balance between glucose and insulin.

However, if the glucose remains higher than it should (above 10.2 mmol/l or different target based on the medical team), they may suggest that she pass the oral glucose tolerance test (OGTT) test, which diagnoses pregnancy diabetes.