The human body is an exceptional machine that adapts to different situations, such as the birth of a child. When the placenta detaches after birth, a hormonal message is sent to the mother’s brain to tell her that she now needs to feed her little one. This starts the lactation process. It’s a good idea to understand this phenomenon when preparing for childbirth, as you will know what is happening to your body. 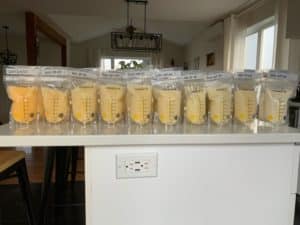 The components of breast milk will significantly change over time to adapt to the baby’s needs. After repeated feedings, stimulation maintains hormonal function to sustain milk production (prolactin) and release (oxytocin).

Breast milk goes through several transformations, shifting from colostrum to permanent milk. Colostrum is the first liquid released from breasts. Frequently, pregnant women will note transparent or yellowish liquid released from her breasts, or the presence of a dried crust on her nipples starting from the 16th week of pregnancy. This release of colostrum prior to birth confirms that the hormonal process has started, developing the mammary gland in preparation for future breastfeeding. However, many future mothers will not see the presence of this liquid as it will only be produced after childbirth and with the baby’s stimulation through feeding.

Colostrum is a thicker yellow liquid, sweet and rich in proteins, vitamins (carotenoids, in particular vitamins A and E) and minerals (sodium, potassium, chloride, copper and zinc). Newborns can easily digest it even if their organism is still immature at birth. A few drops of this precious elixir gives them enough energy to drink again during their next feeding as it contains natural lactose, which acts as an energy source while preventing newborn hypoglycemia.

Colostrum also contains several antibodies that protect the baby from different potential infections associated with its new extrauterine environment. It is 100 times more effective at protecting against infections than mature milk. This liquid, which is also a strong laxative, helps newborns to empty their intestine, which, during pregnancy filled up with a thick, greenish residue called meconium. This becomes the baby’s first stool.

Colostrum allows the baby’s blood sugar levels to stabilise after birth quickly. It is also a very effective antioxidant. Colostrum is often called pre-milk because it precedes more whitish and thinner milk, and occurs during the physiological engorgement process called lactation. As a general rule, this transition milk will appear between the third and fifth day after childbirth, but it can take up to seven days for late engorgement. This milk is rich in sugar, but also includes more fat and lactose than colostrum, which makes it appear whiter. Between 7-10 days after birth, permanent milk appears, which is blue-white in colour and thicker. This very nourishing milk will likely cause the baby to slow down their breastfeeding frequency. It adapts to the baby as it evolves, providing it with the materials necessary for their development and protection so that they can properly grow over time.

Lipase is an enzyme that helps digest fats and is found in breast milk. If a woman’s milk is high in lipase, it can give it a sour taste, but the nutritional value is the same for the baby, and they will drink it without complaining. This occurs more often if the milk was frozen then thawed. Don’t be scared, though!

If the baby refuses your milk because of this taste, you can simmer (not boil) it then quickly cool it to neutralise the lipase and improve the taste. You can also heat the milk to 65 degrees Celsius with a bottle warmer (check using a cooking thermometer) for a minute then let it cool down quickly.

The nutritional value of breast milk per 100 ml is the following:

So that is how breast milk changes over time! Nature is well designed, just like your body.

Don’t forget that you need to give your baby vitamin D supplements. This vitamin is essential for the growth of a baby’s bones and teeth. There are two types – D-3 which is absorbed through the skin from the sun, and D-2, which is added to foods such as orange juice and milk. The latest health recommendations state that it is preferable to give vitamin D supplements to all babies, both those breastfed and bottle fed, for the first year of life. Why? Because we know that in Canada, vitamin D-3 absorption from the sun is almost inexistent. The baby is protected from the sun during the summer, and later in life, they will wear sunscreen to protect from harmful rays. Even if the formula already includes vitamin D, the amount that needs to be ingested to obtain the proper dosage is very high, thus the need for D-2 supplements.

Please read these articles for additional information or as a follow-up for prenatal classes: