Language development – from birth to one-year-old

Language evolves tremendously along your baby’s first year of life. He expresses his needs, joy, desires, satisfaction, dissatisfaction, etc. To find out if your child has language delays over time, it’s interesting to first learn about a child’s usual skills from birth until his first birthday. Please take note that some children, at some point, seem to develop their language skills less quickly, but their motricity progresses faster. Around the age of two, these get back to stability. It is recommended to stimulate adequately all basic skills, likely to be delayed, to establish a good pace of language learning.

The infant knows a lot about the acoustic form/sound of words in his mother tongue, before he can even talk. For the baby, pronouncing words requires learning several movements of the head and neck structures and their coordination. Thus, he may understand many things you tell him, without necessarily being able to express these with words and sentences.

Here is a summary of a child’s language acquisition by age group, as established with the collaboration of a highly experienced speech therapist, Johanne Bédard. Many thanks to her for all the expertise she provided through this educational article prepared for you, dear parent.

From birth to 2 months 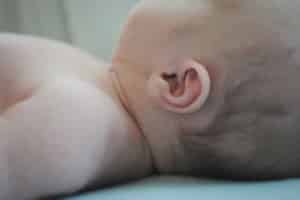 The newborn hears and recognizes his mother’s and father’s voice, even if he has no idea of the meaning of words yet. Language communication will most likely be focused on eye interactions. The baby will make eye contact with his parent and react to the tone, voice, and facial expression of the latter.

Very quickly, baby recognizes the different intonations, according to the emotions of his parents or those surrounding him. He distinguishes joy, anger, tenderness. He looks at the faces. He will express discontent before pleasure.

At this precise moment of his development he has his own language to communicate with you, i.e. he is crying, shouting, smiling. Such is his primary form of verbal and non-verbal communication.

Around his third week, baby will make new sounds, claps of the tongue, sometimes growls. Spontaneous gestures should not be disregarded either, since in some babies this is an advanced sign of communication. Not to forget that the body also speaks. Baby interacting with you and you with him! 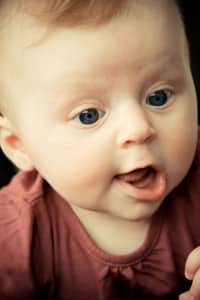 The baby starts producing sounds spontaneously in a playful manner to Thear his own vocalizations, and to see the reaction on the faces of those surrounding him. Thus, vocalizing becomes his way to communicate. You’ll be surprised by the duration, intensity and pitch of the sounds that can come out of such a small body, hihihi! Baby is experimenting his first step in the articulation process.

Yet, he can already discriminate two very close syllables like “pa” and “ta”.

When you talk to him tenderly, he babbles, smiles and giggles at you. He reacts to familiar voices and to noisy toys. You’ll see that he addresses his father and mother differently. He has different cries to express different feelings too.

At this specific age, the baby is sensitive to vowels and consonants. He screams louder, thinks he’s funny. This is known as self-stimulation. He likes to hear his voice, and even occasionally scares himself with the intensity of his vocalizations which change along with his mood. He laughs loudly and explores different sounds like consonants: p, b, m, m, t, t, d, n. Looks like he answers you when you talk to him, while often he gets bored if he is alone. He likes socializing.

Between the ages of 6 and 7 months the baby really tries to interact, namely through gestures. He babbles more frequently, increasing his knowledge of phonetic rules through the use of a succession of phonemes (e. g.: b, an, g). He pays attention to a variety of sounds and would like to imitate these, combining vowels and consonants and forming syllables. Some children first form letters with the lips: p, b, m. Others practice those produced with the tip of the tongue, hitting the upper teeth or gums: t, d, n. As baby starts babbling, you may hear the k, g from the back of his mouth; these sounds are not yet generated voluntarily. All these consonants are likely to appear at this stage.

Baby is interested in the people who talk to and look at him. He reacts to his name by turning his head. He pays attention to more familiar words like “dad”, “baby”, without understanding their full meaning.

It is amazing to see how a baby this age can record repetitive acoustic forms in speech, even without understanding the meaning of the words. He must first acquire this acoustical baggage (sounds) and then match a meaning with these. In short, the process turns into lexical baggage acquisition, i.e. matching words with meanings.

Around 9 months, baby understands more words, without being necessarily able to articulate these. More frequently, he reproduces the gestures frequently observed. He will start giving a meaning to familiar words often repeated in his daily life, such as: mother, father, milk, nap, bath and the pet’s name.

You will then acknowledge progress in his comprehension. He will respond to more complex action commands such as waving goodbye, approaching his mouth when you ask him for a kiss or pointing at the object you are talking about, babbling while looking at you. Even if you are unable to understand his words, he is trying to interact verbally. He reacts to simple, short and clear verbal requests such as: “no no”, “give me the ball”, “throw the ball”. He is discovering the symbolism of language. 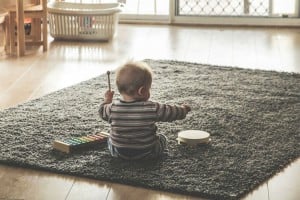 To give you an idea, a 10-month-old baby usually understands about 50 words. It takes him another 8 to 12 months before pronouncing the same amount.

Around the age of 9 to 12 months, the baby articulates his first words, “mom” or “dad”. Your baby could surprise you though, pronouncing a totally different familiar word, such as your pet’s name, hihihi!

At one-year-old, he could easily pronounce 2 more words other than “mom” or “dad”, knowing their full meaning. A trained ear will often notice that baby has a more extensive range of words that he can pronounce, in his own way of course!

Although we have focused on infant language, here are some data to help you anticipate the language development stages with your growing baby.

To continue this reading, please refer to the next article Language development after one-year-old.