To learn about the specifics of SIDS, read the start of the article, Sudden Infant Death Syndrome (SIDS).

While the exact cause of SIDS is unknown, research continues. We still don’t know if we will be able to identify a single cause of this syndrome. But we have found that some illnesses can have an impact on the baby and cause SIDS. These include meningitis, encephalitis or other congenital or metabolic afflictions that were no caught at birth. Additionally, some clues can also explain why SIDS occurs, such as:

1. The Way the Baby Sleeps 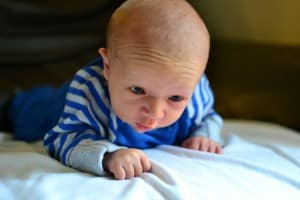 Some SIDS cases can be caused by the baby’s position, laying on their side or stomach, head downwards. The Canadian Pediatrics Society, the Canada Foundation for the Study of Infant Mortality, the Canadian Institute of Infant Health and Health Canada recommend that all infants in good health sleep on their back. Parents should place their child on their stomach several times a day when awake, keeping an eye on them. The stomach position can prevent “flat head” (plagiocephaly) and counterbalance the muscle development effects of sleeping on their back.

Some infants have difficulty controlling their body temperature. In the past, most SIDS cases occurred in the winder, perhaps because the babies were excessively covered and risked a significant rise in body temperature. We now have data that shows that there is no longer a seasonal difference in the number of deaths. However, excessive heating is still considered a risk factor.

Researchers support that some babies may be more vulnerable to SIDS as they may be carrying a specific gene. Research is ongoing to understand the phenomenon better. Based on the latest data, some scientists state they have identified a brain stem anomaly in babies that have died in SIDS-like conditions compared to healthy babies. This region of the brain controls breathing and the baby’s head and neck movements. This makes them believe that this structural difference is possibly the cause of SIDS, but tests for screening have not been developed yet.

Exposure to second-hand smoke is a risk factor for newborns (even during pregnancy) and infants. This was identified as one of the more severe risks for SIDS. The higher the exposure, the higher the risk.