Did you read the first part of this article called Skin Problems during Pregnancy?

Definition and explanation why:

Skin hyperpigmentation is one of the most common changes during pregnancy. It will occur in about 85-90% of women. We don’t know how it happens, but its development is attributed to many factors, including genetic predisposition, hormonal changes and exposure to UV rays. We do know that increased metabolism during pregnancy will activate pigmentation cells, which will lead to potential skin colour changes.

The cells that pigment skin (melanocytes) are sensitive to pregnancy hormones (a-MSH, estrogen and progesterone).

With hormonal stimulation caused by pregnancy, there is an increased production of melanin, which causes the hyperpigmentation of the skin. This will be more prevalent towards the end of the second trimester and can last up to one year after childbirth.

Most pregnant women note darker pigmentation in skin zones that were darker to begin with, such as breasts, genital organs and the skin around the belly button. For some women, hormonal changes during pregnancy will lead to more generalised hyperpigmentation. 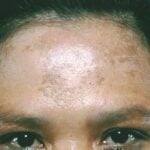 Melasma, generally known as a pregnancy mask, is also a type of skin hyperpigmentation. We don’t really know all the details about why it happens. There are many factors involved, such as exposure to the sun and increase estrogen during pregnancy.

Melasma frequently affects the face, but it can also affect the arms and back of the chest. After childbirth, melasma will persist in women with darker skin and gradually diminish in women with lighter coloured skin. 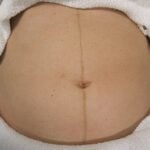 The linea nigra, also known as the pregnancy line, is localised hyperpigmentation. It usually occurs during pregnancy and is a brownish line that connects the belly button to the pubis. This line appears at the same place as where the abdominal muscle separate, called diastasis recti.

Continue reading to learn about acne during pregnancy.