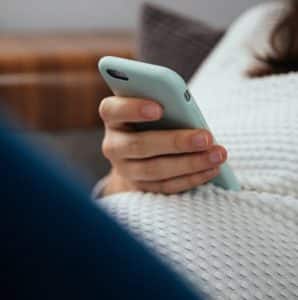 In this article, I would like to share some of my thoughts about social networks and more broadly about the role of technology in motherhood and fatherhood.

First, you need to distinguish technology as a communication means, something allowing you to send a message so everyone can access it (I use technology to talk to you about the perinatal period), from technology that enables media, including social networks, to influence public opinion, support trends or standards in the general population.

Over the last decade, I have seen many future and new parents adopt changes to technology and how information is communicated. Very personal images and videos are widely shared, even of very intimate events.

The Idealisation of Motherhood

Most of the time, publications about motherhood deal with announcing someone is pregnant, the baby’s sex or photos of the newborn even before close family members are told. It’s a rush to share in public, a pervasiveness of social networks. You have to rush to share the positive things happening to you with the highest number of people possible. It’s like it’s a competition.

Some pregnant women feel pressured by this content. It focuses on the best, most beautiful, perfect events, even for childbirth. We consciously know that social media exposes us to fewer failures, difficulties in life. However, these events are also part of our reality. So it seems this portrayal of the pseudo-reality surrounding pregnant women, women giving birth or parents, is idealised. This means that many women feel they failed if they didn’t become pregnant before their first cousin. Or that they failed if their pregnancy had complications, unlike their best friend. Or they didn’t give birth naturally, like their sister or neighbour, because they needed a caesarian.

In certain countries, “Crowd Birthing,” which is giving birth in the public eye, is very popular. Some women, often rich stars or public personalities, bring in hairdressers and makeup artists so that the pictures are magnificent. They then share them during labour and after giving birth.

Do you remember Kate Middleton’s grand entry after giving birth, with her perfect hair, perfect makeup, dressed perfectly with a tight dress? What kind of message do you think this sends to pregnant women preparing to give birth?

This new trend is directly associated with the popularity of social networks. They drive an obsession for appearance, looks, the perfect image. This directly applies to this need to appear perfect at all times, even after a long and difficult childbirth, as if it was nothing. This phenomenon is in full growth.

Through my own experience as a perinatal nurse, I totally understand the desire to share happy events with those around you. But can it go too far?

For example, I have noted a serious increase in digital communications during labour and immediately after childbirth. Many maternity nurses have noted that women lack concentration and don’t focus on what they’re experiencing. They’re not present in the moment. This seems to be a significant influence on the pain intensity felt during the progress of labour. In these circumstances, the future mother will have more difficulty managing her discomfort and in the end, will suffer more.

For the father (or partner or attendant) at their side, their frequent use of technology has an impact on the quality of their presence for their spouse. If they’re texting or posting something, they’re not in the moment, helping the mother focus on breathing, the baby’s descent or just being present to help place everyone’s energy where it matters.

Some institutions have even started to restrict the use of smartphones and tablets in the maternity ward to promote the best possible conditions for labour and childbirth.

This is quite a change if we look at childbirth through history. Giving birth to a child was considered a very private, intimate and personal event, where few people had access. It was a sacred space where one of life’s most important events took place. It was often shared between women who attended the mother through the stages of childbirth. Men were often the guardians of the space where mothers gave birth, to protect against intrusions from the outside that would disrupt this unique moment when a new member of their clan was brought into the world.

Many aboriginal and African peoples saw childbirth as a rite, a gift from nature that ensured the survival of their species.

Then, more recently, childbirth took place in the home, often with women who had acquired knowledge through their practical experiences, and they would transfer this knowledge from generation to generation. They were known as midwives or doulas. Read my article called Who is the midwife? to learn more.

Then, around 1900, hospitals arrived. Doctors took on a more prominent role due to illnesses, poor hygiene and complications often occurring during childbirth leading to the death of mothers and children. By the 1920s and 1930s, most births took place in hospitals. The environment was often cold and sterile, and fathers were rarely admitted. At the end of labour, before the baby was born, women were often put under using gas or injection. Their arms would often be restrained. These were supposed to be measures to prevent complications, but they had consequences for both the mother and baby. Mothers had difficulty recovering and were separated from their baby, leading to problems with breastfeeding and the attachment process.

It wasn’t until the 1970s that women’s groups were heard. They wanted births to take place in a more natural setting full of humanity, warmth, surrounded by significant people who could support mothers. They wanted to give women back their ability and power to give life. Reduce procedures, respect silence and anticipation. This popular “uprising” led to the development of birthing rooms in maternity wards, birthing homes monitored by midwives, now available in many regions. This is added to services for parents who want to experience childbirth differently.

Today, whether choosing where you give birth, the way your baby is brought into the world, or your presence on social media, for me, it’s important that parents remain in control of their choices, comfortable and at ease with them. Your life experiences belong to you.

In conclusion, I would say that the childbirth experience is still in transition. Technology is playing an increasingly significant role in it. Do you think this is a good thing?

To learn more, read these articles (in french):

Watch these videos (in french):

It’s something to think about!