If you would like to learn more about upper body changes during pregnancy, read – Upper Body.

Pregnancy symptoms are felt around the body, and in this entry we will look at the abdomen.

Constipation is part of a pregnant woman’s life. In the first trimester, between 25 and 40% of them have problems with constipation. We speak less than 3 stools a week and a firmer consistency. Intestinal movements, also called intestinal peristalsis, slows due to hormones. The intestine relaxes and becomes lazier. Intestinal transit slows down due to progesterone and it is also related the compression caused by the increased contents of the abdomen. At the intestinal level, there is an increase in absorption throughout pregnancy. 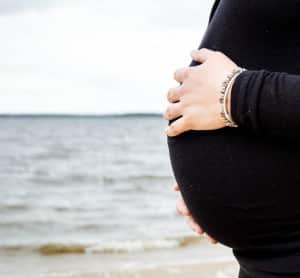 Additionally, the uterus will increase in size by 40 times and its weight 15–20 times as the pregnancy advances. This leaves little room for the intestine to do its job. It’s compressed, which doesn’t facilitate the elimination of waste. It can also be said that iron consumption, the changed mechanical aspect of the intestine and the lack of exercise can also be possible causes of the emergence of constipation.

At the end of the pregnancy, the larger baby can sometimes compress the intestine.

And what about bladder performance? Urinating frequently from the start of pregnancy will constantly remind the mother that their metabolism has sped up, even for their kidneys.

Kidney filtration will increase by 50–85% and this affects all pregnant women. More liquid to filter, more work for the kidneys and more urine to eliminate.

For the vagina, many pregnant women experience vaginal discharge and a pulling sensation at the start of pregnancy, sometimes feeling little electric shocks. Many women will have slight pinkish, reddish or brownish bleeding which resembles coagulated blood during their first trimester. This isn’t bad news in and of itself. It can be attributed to the uterine cervix, which bleeds easily, or the implantation or nesting of the fertilised egg in the endometrium of the uterus. Or even following sexual relations. The bleeding can be repetitive but in a low quantity, and this without clots and very low level pain at the bottom of the stomach. If this isn’t the case, consult your doctor.

Because of hormonal changes, the vaginal pH, or the acidity or alkalinity of the vagina, will become alkaline. Rather than acidic as usual to protect women from external infections, the pH will become alkaline due to a higher level of glycogen. All pregnant women are more likely to develop fungal infections (pregnancy vaginitis) or vaginosis due to bacteria. This can be treated and won’t impact the mother and their baby.

A pregnant woman’s abdominals aren’t stretched for a first baby. These muscles will lengthen at least six inches during pregnancy, that is, 2 to 3 and a half times their usual length. For the first baby, 100% of pregnant women at 35 weeks pregnant will have abdominal diastasis and 40% 6 months after giving birth. Diastasis is the spreading and thinning of the rectus abdominis muscles during pregnancy and the smaller the gap the better for postnatal recovery. This distension can cause tightness, burning in the lower abdomen and cramps to the expectant mother. This diastasis has the consequence of weakening the strength of the pelvic floor, hence the importance of firming everything up during pregnancy as a preventive measure to better recover strength and tone postnatal. It can easily take between 4 and 6 months for pelvic floor recovery in a new mother, but it can be up to a year and more sometimes.

For a 2nd or 3rd baby, the stomach should exit the pelvis easier given the abdominals were already stretched. As such, maternity clothing can be worn much faster, often during the first trimester.

During pregnancy, about 50% of women will have lumbar pain (lower back) or pelvic pain (ligamentous, articular) (pelvic bone under the front of the stomach). Even if more pain occurs between the 20th and 40th week of pregnancy, it can occur during the first trimester for certain women.

Later in the pregnancy, around 32–34 weeks, the larger baby will start their descent towards the mother’s pelvis. This will lead to other effects and feelings. This includes cracking, pressure on the pelvic system and looser hips. These ligaments are more relaxed during pregnancy due to the presence of relaxin. This leads to hyperlaxity which allows for stretching. However, there is often radiating pain and a general exam is often necessary to help reduce pain occurring in different parts of the woman’s body.

Attention, inappropriate muscle activity can increase the stress of pelvic structures and be more sensitive in the end for the pregnant woman.

Your back will have to work more with the additional weight of the baby. It needs to be supported towards the front. Your backbone doesn’t like to flex. Your normal centre of gravity will be changed by the frontal increase of your weight. For better balance, the pregnant women will widen their base with their feet and arch their back, leading to pregnancy lordosis. For many, this dorsal compensation will probably lead to pain or discomfort in many positions. The application of ice to the painful areas for 5–10 minutes several times a day can help you due to its anti-inflammatory effects. A support belt can also be used to help support the stomach and pelvis. It reduces the pressure of the weight on bone structures and diminishes pain and discomfort.

Most of the pain will disappear following delivery. But some may still feel discomfort after the arrival of the baby. They should see an osteopath or physiotherapist specialising in the pelvic floor. This could help a lot.

To learn more about the lower body during pregnancy, see Lower Body.

Mariefortier.com and the information found on the website are practical tools for future parents preparing for the arrival of their baby.
The contents of the website do not in any way replace the skills, knowledge and experience of qualified health professionals. They know the facts, circumstances and symptoms associated with each individual. As such, the company Marie Fortier Inc. and the people who work for the company cannot be held liable for adverse effects or consequences stemming from the use of the information found on the website. It’s the user’s responsibility to consult with a doctor or other qualified health professional for personal questions.
Tous les renseignements personnels collectés et conservés par le site de Marie Fortier sont protégés en vertu de la Loi sur la protection des renseignements personnels du Canada.