The annoucnement that changed everything – two babies

“Do you want to see your baby?”

I wasn’t expecting that. I was at the end of my first monitoring appointment with my spouse. I was only nine weeks pregnant. I still didn’t really understand that I was pregnant. I wasn’t really nervous about seeing my baby for the first time. After all, they all look this same at this stage, right?

My spouse came into the exam room. I was holding a screen no bigger than a cell phone while the doctor started the ultrasound. A tiny shrimp appeared. Our little shrimp! My partner looked at me smiling. The doctor explained the images while moving the device around. Suddenly he stopped, silent. Too silent…

“Geneviève, there are two babies! We can see them clearly!” 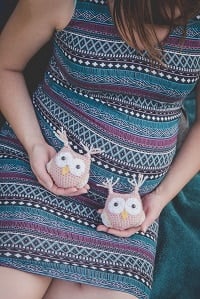 My partner laughed. You know, those nervous laughs you had a school before presenting something, or on your first date? He couldn’t stop. I could see his phone bounce around as he laughed, still filming.

The doctor left the room to give us a moment.

I laughed and cried in the space of two seconds.

I laughed because the day before we laughed about the idea of having twins. My spouse is an identical twin, but supposedly that doesn’t have an impact.

I cried because I realised everything it would involve. Two will now be our lucky number: two car seats, two beds, two highchairs, two times everything and half the sleep.

I have to admit that the news hit me like a hammer. Having one baby is already stressful, so imagine when you find out you are going to have two renters in your stomach. Everything was rushing through my head but in slow motion. Like in a fog.

The doctor started to explain that this kind of pregnancy has risks and I would be monitored closely. A high-risk pregnancy. Not very reassuring…

A few days later and I’m still in shock.

Smiling, he said “You said you wanted two children before 30. You did it!”

That’s what I always wanted, but you know with work, the house, our marriage…I had put that idea to the side. He’s the one that made me see the beauty in this event. Two babies are also: two best friends, twice the hugs, two times the memories. I told my partner that it’s also a family pass to the zoo!

In the end, I was happy that my wish came true! 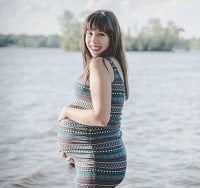