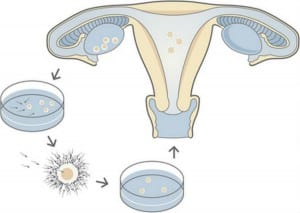 Some male or female conditions prevent fertilisation other than with IVF. This might be women who don’t ovulate or whose fallopian tubes are completely blocked or who have moderate or severe endometriosis, which makes fertilisation or implantation impossible.

On the male side, there are also severe sperm production issues (absent or very low quantities). The man’s ejaculatory duct may be obstructed, which prevents the sperm from being ejected. Each couple has a story, and each one will have a road they need to take when trying to procreate.

IVF involves extracting eggs and sperm and physically combining them outside of the body to promote fertilisation.

The fertilised egg will be directly placed in the woman’s uterus for implantation. While we commonly use the term test-tube baby, it is much more than that. It’s an extraordinary medical and scientific advancement for fertility treatments.

This discovery allowed Mr. Robert Edwards to win the Nobel Prize for Medicine in 2010.

Many have high hopes when it comes time to try IVF to fulfill their dreams of having a baby. But you should know that there are no miracle solutions that provide 100% success rates in the infertility field.

Only 30% of IVF treatments lead to pregnancy during each attempt, each cycle. Unfortunately, many governments don’t pay for IVF, and the cost of a cycle can vary from between $8,000 and $12,000.

There are three kinds of IVF; classic, mild ovarian stimulation or extracting the egg that is naturally released without using other procedures.

It involves the use of high doses of medications leading to hyperstimulation of the ovaries, which will produce 8-12 follicles, which will release as many eggs. It stimulates ovulation. The eggs will be used for both the current insemination and stored for future ones if it fails. That means that if the IVF doesn’t work, the extraction process is already completed for future attempts.

This procedure is becoming more common and involves using a basic medication for a short period, less drastic than classic IVF. A few eggs will be released, which will then be extracted.

There is no stimulation involved. This kind of IVF allows for the extraction of a single egg which was released naturally.

Now, what are the stages of in vitro fertilisation?