Did you read the first part, Colic in Babies? 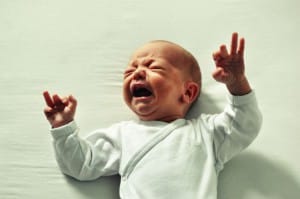 The scientific community is increasingly linking normal baby development with the development of their microbiota (intestinal environment), intestinal neurological immaturity, and brain maturation. Babies with colic don’t have the same microbiota as colic-free babies.

We sometimes try to compensate by giving the baby probiotics (Lactobalicus reuteri, Bifidobacterium lactus BB-12 strain). This seems to improve the situation for some babies, those breastfed by their mother and those given formula with added probiotics. We can explain colic in a newborn in part due to reduced mobility (initially) and higher intestinal sensitivity caused by an immature nervous system that needs to be strengthened.

Causes of colic can also be due to the baby’s temperament and their environment. This can include cigarette smoke which can increase colic. If a mother or father has prenatal stress, maternal anxiety or postpartum depression, this can play the role the appearance of baby colic.

If colic last more than five months, you have to look at other factors such as regulation disorders, even if this is rare, with difficulties sleeping and eating over time. Depending on the doctor’s examination, you might be referred to paediatric neurology, a nutritionist or an occupational therapist.

Now, how can we relieve the colic period?