In general, the arrival of a new child is a joyful time for the whole family. But for 10-15% of new mothers, their new status will shake up their life leading to nightmares. I know that this isn’t something that is talked about given social stigma. The arrival of a child is supposed to be a happy time! But if this occurs, what does it mean?

The book by Nathalie Parent and Joanne Paquet, titled Du post-partum à la dépression (French only), deals with postpartum depression and help women verbalise their emotions and recognise the experience of other women who talk about their painful experiences after childbirth.

In today’s society sees mothers as superwomen, smiling, happy, efficient. The negative feelings some may feel are less accepted. This is why some women that experience a problematic postpartum isolate themselves. Complaining, being unhappy after having a such a beautiful, healthy baby? Never!

In the health network, we see an increasing number of tired and exhausted mothers. Because of social norms, they expect themselves to be multitaskers, able to do everything and show everyone how capable they are. These women are often a bit older, professionals, independent workers, have a spouse that works too, and they take more on their shoulders which becomes demanding over time. And today’s superwomen have difficulty accepting help, want to do everything by themselves and have difficulty accepting when things don’t go as planned. Parents also expect their child to be perfect! But reality has other plans. Appointments with health specialists (doctor, psychologist, special educators) are also increasing. Over the years that makes quite a burden. The situation can become explosive. Often, mothers find their lives unhappy and want a bit of a break, respite. This can affect the whole family.

During my work, I became aware that many people had never heard about postpartum depression during their pregnancy, and often wrongly thought that it only happened to others. But it’s possible to have negative feels and postpartum depression, and I find it essential to talk about it. Women need to come out of the darkness, get over their feeling of social pressure and should be encouraged to express themselves. I hope that the husband, family and friends can then better understand the signs that the new mother is having difficulty managing on her own during her postpartum. Never ignore a pregnant or new mother’s distress, even if the symptoms don’t seem severe, because it can deteriorate over time and develop into a more profound depression. This can have an impact on the woman’s health, but also on the health of the baby and the rest of the family.

Having a baby is stressful! 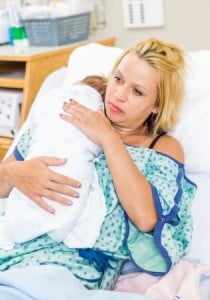 Baby’s have wide-ranging impacts on a person:

The postnatal period is a period with significant shifts, and hormonal changes are part of this. Indeed, the hormone estrogen, which provides energy during pregnancy, lowers after childbirth and progesterone cause increased fatigue and an anti-anxiety (anxiolytic) effect, which can lead to depressive symptoms over time. Cortisol also comes into play, which is a hormone that is released when stressed. In everyday life, it can be helpful in moderation to adapt to daily stresses. However, if released in high quantities, it can lead to signs of anxiety and depression in new mothers facing many burdens and responsibilities. Added to a lack of sleep and reorganisation of daily life, 60-80% of women will experience a period of light depression called the baby blues. In the majority of cases, this period is short, between 2-4 weeks after childbirth. But for some, crying, mood swings, impatience, fatigue, lack of interest and feelings of incompetence will increase over time and shift towards depression.