The Risks of Baby-Led Weaning

To read the previous part, see The Reasons Stated by Parents to Start Baby-Led Weaning.

The risks of baby-led weaning should be considered when deciding how to feed your baby.

Founded or unfounded, to be documented in the future:

The conclusions of the BLISS study seem to indicate that the ideal approach is to combine both food pieces and spoon-fed purée, as you can avoid many potential inconveniences of a BLW approach. With certain foods that aren’t solid, like baby cereals enriched with iron and yogurt (it also has added iron), you meet specific needs. You can also allow the baby to handle the spoon on their own. According to the 2022 update, it is not appropriate to perform BLW with a baby who has a lot of facial eczema, as the damaged skin could increase the impact of allergens. 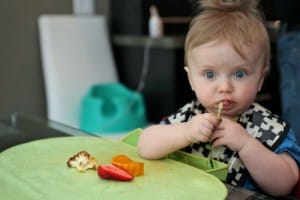 Of course, you have to avoid large pieces due to risks of choking. Even if you present the food in small pieces, the baby might have a gag reflex. This isn’t choking, but associated with the maturity of their nervous system and a reaction to poor chewing of food that ends up in their throat. You have to remain alert and offer safe foods that don’t hinder their chewing and swallowing. This is why it’s preferable:

When we use baby-led weaning, you have to be patient and vigilant because meals are often 50% longer. The baby will play with the food, crush it in their hands or throw it on the ground. You will wonder if they have eaten enough of everything and if they consumed enough nutrients for their development.

In conclusion, other research and experiments about BLW are ongoing, and I will update this information for you as scientific developments are released. Most health professionals are open-minded about baby-led weaning, but have specific reserves associated with the inconveniences for the baby over the medium- and long-term. Only through future research will we have

additional data to understand the approach better. The ongoing BLISS study can undoubtedly lead to more information for our currently limited library of knowledge about BLW.

I hope this entry has taught you more about this approach.

Do you need more information? Please watch the video about Baby Led Weaning, or BLW (in french) filmed with the occupational therapist Catherine Cusson.